The Usa River Rehabilitation and Training Center is located in the northern part of the United Republic of Tanzania. Usa River is a small city located on the road leading from Moshi to Arusha. Mount Meru is in eyeshot, and the Kenyan border and Kilimanjaro are also close by.

Tanzania on the African Continent

Tanzania gained independence from the United Kingdom in 1961, and in 1964 it united with Zanzibar. The name Tanzania is contrived from Tanganjika, Zanzibar, and Anzania. Julius Nyere is the founding father of Tanzania and maintains a high reputation in the present day. He tried to lead the republic onto the path of African Socialism politically, but this idea of „Ujamaa“ was renounced before the turn of the last century. Because of its high level of debt, the republic is dependent upon closeknit cooperation with various international aid organizations. 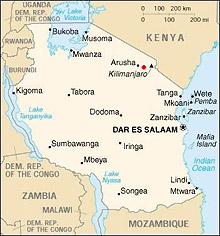 Of the 37 million inhabitants of Tanzania, about 44 percent are under the age of 14. They speak over 100 different languages. The official state language Kisuaheli, as well as the common religion, links the various clans. 35 percent of the population is Muslim, especially in the coastal regions and on the islands Unguja and Pemba. A further 39 percent are Christians, and there are several natural religions represented as well.

The 3.5 million Lutheran Christians in Tanzania are organized under the Evangelical Lutheran Church (ELCT), which is the second largest
Lutheran church in Africa. The ELCT operates schools, hospitals, kindergartens, and universities. Since the colonial era, there have been close connections to Protestant churches in Germany, in the United States, and in Scandinavia. In addition to numerous partnerships, the classical missionary organizations have been active in Tanzania for over 100 years.

The URRC can be easily reached by taking the commuter road Moshi – Arushi. The Kilimanjaro International Airport (KIA / JRO) is located 30 kilometers away, near Moshi. The map below shows the Center's location at the Usa River city limits.